I guess it has been long enough. I guess I am over the experience of playing in London enough to post it up here on this blog. I played at this former transvestite bar in Soho called Madame Jo Jo’s on December 14, 2006. Nah, not so bad, and I thank Erik Stein most deeply for arranging said spectacular. I have always liked Soho, too, the area feels really charged, really exciting, like Times Square or Berlin Mitte. It’s just that England is just so damn….nasty. No, not really nasty, so damn, I feel so damn ambivalent about the place. On the one hand, England is the very source of the culture in which I was steeped like a germano-mexican teabag. England is the very cradle of the blessed English language which delights me so. There is this agressive hipness to London, this refusal to refer to any other place, a sense that London is not really part of the earth at all. It seems to be adrift on a dark asteroid, lit by a yellow sodium vapor sun. 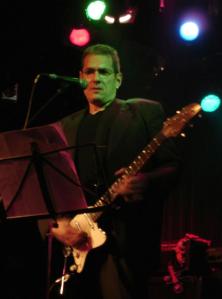 Few places are so merciless to anyone with no money. The pressure to acquire in order to rise above the feculent swamp in which one’s fellows swim is great in London. Those that have in London have so very much, like their equivalent numbers in the United States. Those that have not, are really pitiful scum, are truly shit on someone’s shoes. This is where that agressive hipness comes in. The conviction that one has seen it all, knows it all, been everywhere is salvation from the sodium-lit asphalt reality that one has seen pretty much nothing except the local chicken kebab shop, knows very little, and has been nowhere of any consequence . There is very little support from the environment in the sense of the German word “umwelt” the world around. Here, in Greece, for instance, there is always that blue sky. Blue for all people, all day long. There is always that old sun rolling around heaven all day, lawd lawd. In England in winter, when midnight rolls around at 4 in the afternoon, you might as well hang your head and moan the blues.

Secure in the knowledge

And yet and yet. The world cannot seem to get enough of the culture this place spews out. I cannot help but lump england and america into one cultural behemoth, angloamerica, giving the world books and movies and music by the ton. It seems, though, that the true spirit of the place is found at its borders. The Closed circuit TV, dehumanizing insulting grey nastiness of the British frontier is the naked and awful face of the 21st century, my friends. No one does foul-tempered bureaucracy better than the brits. They have been at this “post 9/11” security state since the seventies and they have it down to a fine science. Fie. Enough.

Blaine L. Reininger was born July 10, 1953 in Pueblo, Colorado. Then he lived a life. By and by, he founded Tuxedomoon with Steven Brown in 1977. He traipsed around America, tuxedomooning until 1980, when he began to traipse around Europe. As a direct result of all of this traipsing, many musical compositions were composed, most of which found their way to some sort of mechanical device capable of reproducing musical compositions. This was mostly for the good. He now lives in Athens, Greece, where he is content.